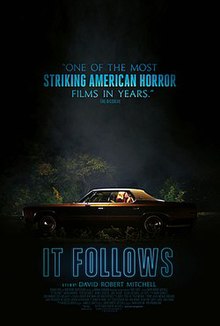 I've been busy for the past couple weeks trying to figure out how to get rid of this thing that has been trying to end me. Seriously, I like to stay in one spot and just relax but I've been getting more exercise than I want, Luckily I've found this great instruction video in the guise of a horror movie. After partaking in an orgy (I made sure to have sex with just one person and snuck out quickly) I've decided to give it a review.
It Follows is a film directed and written by David Robert Mitchell that premiered at the Cannes Film Festival on May 27, 2014 and then limited theater release on March 13, 2015 and with the time that has passed of the short attention span of this day and age the film still has it's popularity, some may have been a little sceptical abut the film because there is a theme of sex in this movie which is a bit of it's focus for plot purposes.
Before we get into the plot I want to point out that the cinematography has a arthouse/ music video vibe that almost takes away from the horror elements of it and instead gives a feel of an independent movie with panning shots and perfectly paced atmospheric scenes which might inspire some horror movies in the future.
What also complements this is the soundtrack which was composed by Rich Vreeland also known as Disasterpeace, who in turns gives the film that extra touch of music video vibe I mentioned early, this made me believe that the movie was actually going to turn into one out of nowhere at some moments but along with that a serious tone shift of alert and panic whenever the film's monster made it's appearances. Seriously though, this film is nice on the eyes and ears as a whole.

The cast also worked really well together as they play their characters to life. The story is centered around Jay (portrayed by Maika Monroe) who is usually surrounded by her family and childhood friends. the illusion of her knowing these people all her life feels real as a scene that show her sister Kelly (portrayed by Lili Sepe), friends Paul (portrayed by Keir Gilchrist) and Yara (portrayed by Olivia  Luccardi) set around in her living room watching an old black and white science fiction movie  while Yara cracks a joke and breaks wind in front of all of them as they all share a laugh other key scenes show Jay's friends by her side when she needs them most at her time of need. This gives a true sense of history of the characters and chemistry really sine between the actors even if it's somewhat subtle..
As for the movie and it's plot; it is done well but it isn't without it's flaws. Some examples; There a character named Greg (portrayed by Daniel Zovatto) who didn't get along with Jay when she was younger as the movie implies and doesn't believe that the monster is real due to it being invisible, even though he helps Jay and evidence of an attack happens before his eyes the character is still doesn't believe. Another issue is the films climatic scene of trying to defeat the monster which seem like a half-baked one at best but hey, whatever get the job done.
Plot wise with little spoilers the film opens up with a basic bitch named Annie (portrayed by Bailey Spry) who looks like she lost her damn mind running out of her house into the streets and back into her house and into her car and drives off in a rush which seems to happen a lot in this movie; tons of running from something that isn't seeable, anyway she makes her way to a lake to await her doom. Then we meet Jay who is a real person, she has a date with a boy named Hugh (portrayed by Jake Weary) who at one point sees a girl that isn't there at the theater they're at cueing him to get the hell out of there with Jay who is confused about the situation. As the night goes on they find a nice place to get it on and after that Jay catches the worst STD of all time, a spooky shapeshifting monster that wants to kill her! From there the ride continues and that's pretty much what I feel should be said about the plot but fair warning! It isn't ever explained how this curse came to be just what you have to do to get rid of it..
I see now that maybe there's more to this spreading curses via sex has more then one type... please excuse me now as I need to seek out a witch doctor or something for my penis had grown eyes and limbs.
Posted by Hardyhara on July 02, 2016