It is without a doubt that horror and wrestling go hand and hand. Such things as the hardcore match, wrestler gimmicks, and bloodshed all back this thought. And how often does one say to themself they wish they can see that one particular menacing force from their favorite horror movie have a match in the squared circle?

Thanks to Japan's lack of tight fisted copyright laws, this fantasy is allowed to become a reality, thus giving birth to a buffet of horror icons turned wrestlers. A very fine example of this (out of handful) is Leatherface.
Man, let me tell you that Leatherface was a guy to be feared, and not to be trifled with. For example: a fan tried to attack him and got massacred for it, Texas style. This seem to have powered up Leatherface because after this his next appearance had him coming back even bigger in size and badder than ever before.

He would often show up to his matches naturally wielding the signature chainsaw, roaming through the audience seats. Not a single soul attending would dare stay put for they booked it as fast as they could to get away from the terrorizer. Maybe it was because they heard what he had done in the past or maybe it's because they didn't want to make that gamble of what would happen to them if Leatherface got close enough.

The matches this monster heel had truly lived up to what the character embodied. Often would they turn into the most disturbing things you can get away with on free TV... Well as far as Japanese standards went. Having the most intense bouts with the likes of Terry Funk, Cactus Jack, Hiroshi Ono, and Freddy Krueger.

One may ask what could be worse than Leatherface? Two Leatherface, of course! There's a really famous match called The Double Hell Deathmatch, showcasing the brutality what the team known as The Leatherfaces were capable of. Let's watch!


Boy, wasn't that hard to watch? This was just a one time team since the duo were technically one and the same. But don't worry, Leatherface teamed with other intense big bads like Jason Voorhees forming The Serial Killers, teaming with likes of Vampire Warrior (known as Gangrel in the states), and Chris Romero in which he became Super Leather.

As Super Leather, matches he had went under the radar as it seems. The only thing I was able to find to make note of was a singles match he had against Raven, which I can't find any footage of. Perhaps it will resurface one day. But yet again most of his big time bouts as Super Leather were tag team ones, facing off against the likes of Jado and Gedo, and Masato Tanaka and Iko Kuroda. 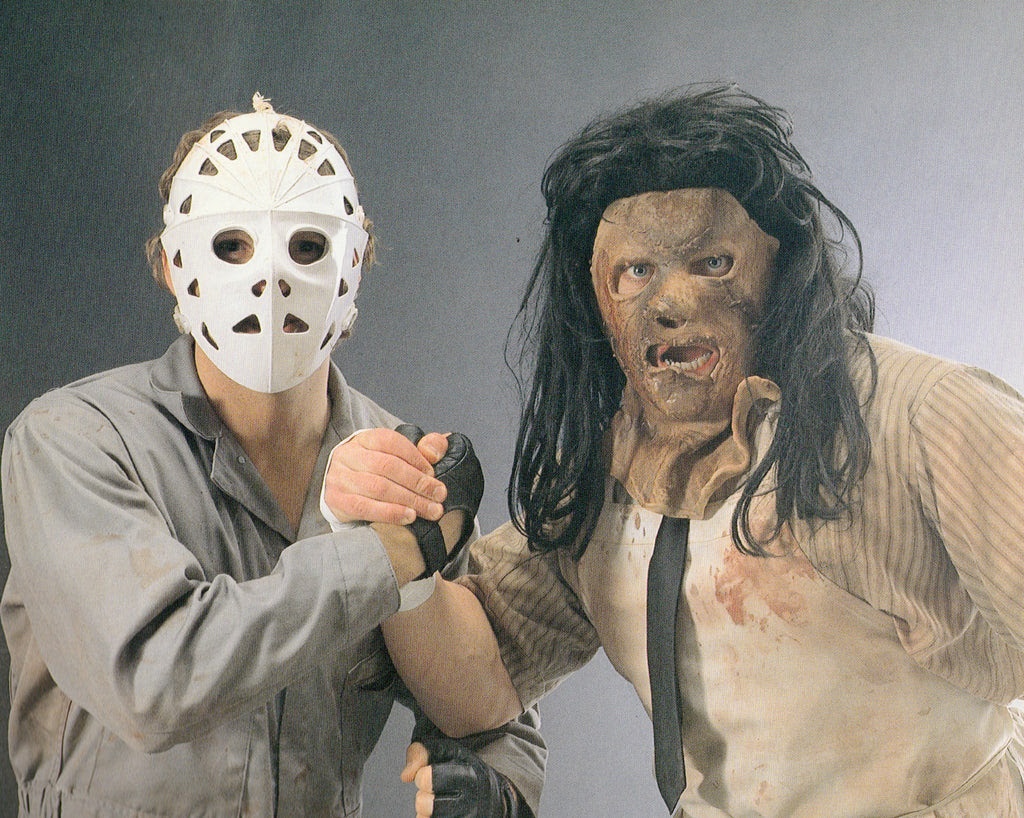 Leatherface/Super Leather was a mostly a tag team champion across multiple promotions, and had been a heavyweight champion for WWWA one time. Perhaps one day there will be an even more intense reinvented version of the chainsaw wielding monster heel because after all these accomplishments, and all the carnage and destruction the character had brought forth is now retired.

Next time, we talk about the Vampire Warrior known as Gangrel.
Posted by Hardyhara on June 10, 2018