September 15th is known to some as Google.com Day in honor of the establishment of the world's most iconic domain name. In honor of this, why don't we ask Google for a horror movie to watch today.

Okay, so let's refine our search a little. Entering "Internet Horror Movies" yields a list of sixteen--- WAIT WHAT THE FUCK THERE'S A LAWNMOWER MAN 2? And it's about...

Oh my. It's about the creation of the internet? Okay, I know what I'm watching today. '

Ya know, I usually try to stick to movies I've actually seen when I'm making these recommendations, but I will occasionally stretch a bit and throw in a title I've heard just enough about to be confident in the assertion that it fits the theme. I don't think I've seen any of the movies on this list. Feardotcom, Unfriended, Pulse, Megan is Missing...

Oh hey, Strangeland. I vaguely remember watching that one like 8 years ago on my birthday. I would toss out a generic Twisted Sister pun here but that would entail actually listening to Twisted Sister. Anyway, it does feature chat room stalkers and some really hilarious late 90s fake internet shots, so I'd say it's worth revisiting if only to laugh at those.

I recall Smiley garnering some amount of hype when it came out a few years ago, and while I keep putting off watching it, today just might be the day for me to see what the deal is with that super neat looking villain. There's also this movie called Chain Letter that seems to be about a serial killer carrying out his crimes on people who don't forward his creepy email. Chain emails have always been one of my favorite online horror tropes.

Oh and Terminator 2 of course, because Google is Skynet.

I know I just talked about Natural Born Killers the other day, and I actually rewatched it just a few days before that, but today happens to be the birthday of both actor Tommy Lee Jones and director Oliver Stone, who apparently also directed one of those "animate severed hand" movies everyone loves so much called "The Hand" in 1981. I've never heard of it before, but according to our good buddy Google, it's Stone's only other horror outing.
Posted by Sarcanis at 12:00:00 AM 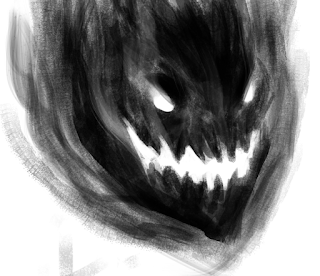