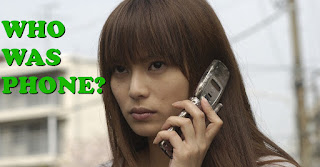 The Foreward and Forewarning.

Takashi Miike. Why did it have to be Takashi Miike? Few directors fill my heart with as much dread as much as Takashi Miike. A brutally insightful film maker with a sarcastic edge when it comes to Japanese culture, with a wide array of films spanning genre and target demographic with the ease of a master of his craft.

Yet, in my mind, Takashi Miike is known for one film. Ichii the Killer. His depictions of sex, violence, and the uncomfortable merging of the two have forever stained my view of his work with the secret, hidden hues found inside the human body. Greasy and glistening with fluids best left unknown. The kind that leaves you feeling grimy long after touching them. A grime of the soul. I think that may be the best description for both the work and the man. Soul Grime. It's this lens that I approach this review with, so fair warning.

Yumi Nakamura, a brilliant young student studying child psychology meets with a group of friends at a pub.They promptly dump their exposition and get on with their sad, doomed existence as fodder for supernatural shenanigans as Yumi's friend Yoko misses a phone call, and when checking the following voicemail makes a shocking discovery.

The call came from two days in the future, and was sent from the Yoko's own phone. The voicemail is even more bizarre, being just an innocuous, everyday phrase, followed by a scream. Everyone plays this off as a joke, getting a good laugh at it, until Yoko is pitched off an overpass, and into the path of an oncoming train, her last words being that of the previous voicemail. Her severed arm, pitched clear of the carnage and still holding the indestructible little flip phone and dials a number.

Another mysterious voice mail appears, this time from Yoko's boyfriend Kenji. He was kind enough to play this message for a visiting Yumi. Kenji even has the good fortune to meet his demise in front of her, being pitched down an elevator shaft by a surprisingly strong ghost, still in peak health despite having a severe case of asthma, as is evidenced by the sound of a phantasmal inhaler is heard just before the attack . At the bottom of the shaft, Kenji's phone dials a number, seemingly of it's own volition as a delicious looking piece of Ghost Candy falls from his mouth.

Talk starts circulating about the bizarre deaths and equally bizarre voicemails, which attracts the attention of shady private investigator, Hiroshi Yamashita, who lost his sister after receiving one of these phantom phone calls. Yamashita weaves through the seedy underworld of creepshows and corrupt cops to find his way to our heroine, Yumi, who joins him in his task to try and save her friends who are seemingly being targeted by all this haunted harassment.

Another call, this time to Yumi's friend Natsumi, who receives an unsolicited picture from a lewd ghost, who is seen creeping around a corner to our now doomed recipient. Much like Yumi, Natsumi is approached by the Japanese Zak Baggans, the host of a trashy tv show who promises to get her to an expert exorcist, only to exploit her for the ratings boost that having a girl with a rapidly approaching shelf life hanging over her head can provide.

Natsumi dies hard. On live TV. The jacked athsmatic apparition twists her head off in front of the camera, after taking a few hits off the inhaler. Another call is made, this time to Yumi herself as another piece of ghost candy comes tumbling from Natsumi's mouth.

Now with her life on the line, Yumi and Hiroshi begin a race against time to find out the origins of the ghost, and how to placate it's rage before it can kill again.

This plot may sound familiar to most of you, and that's because it is. It's Ringu. Note by note, beat by beat. It's Ringu. It's predictable and bland. It wraps itself in the "comfortable" and established horror tropes of films like Ringu and Ju-On which were horror gold at the time and presents them as intentionally boring as possible. The characters are flat cutouts at first glance and lack any hint of depth. The kills are predictable, and lack Miike's "signature flair" outside of the live execution of Natsumi. It's deceptively intentional. Takashi is lulling you in to a false sense of security.

The finale however, is pure Miike. Gore, fluids, too realistic depictions of child abuse and a liberal coating of societal filth come splashing down, creating that ever elusive aforementioned soul grime that is Takashi Miike's sovereign realm.

This was never a film about ghosts. Not in the traditional sense. Now don't get me wrong, there's plenty of otherworldly events all across the film, but this is the ghost of abuse. Child abuse is a heavy theme in this film. Mother to daughter, daughter to sibling, in a never ending cycle. It's less about monsters from some nebulous spirit world, and more about the monsters we create when trying to quell the ones inside us.

It's hard to tackle this theme without spoiling the ending, which was a genuine surprise, and I hope these words inspire you to check out One Missed Call. It's not a film you enjoy. None of Miike's films are films you sit down to enjoy. It is an unavoidable cycle of abuse after all. Director to audience. Me to you.
Posted by Sarcanis on April 25, 2020